F for the old forum.

Sit back, relax, and enjoy some forum-based games.
Post Reply
12 posts • Page 1 of 1 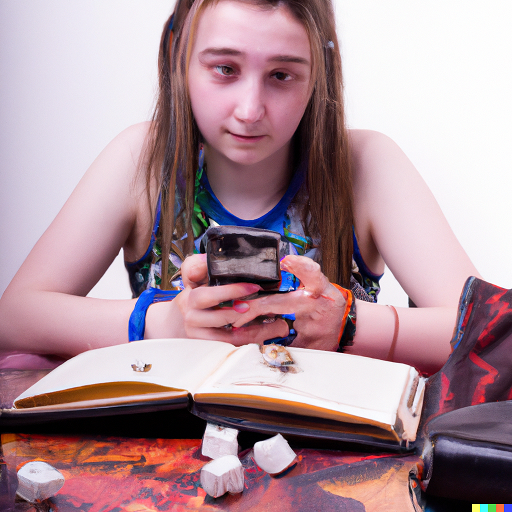 Flavour:
The year is 2022, and a high school student has found her parents' old Dungeons and Dragons Expert Set, complete with notes from the campaign they were playing in the 1980s. She posts them to tik-tok, and her friends joke about getting together to play. Some of her friends aren't joking, and so they plan a weekend-long sleepover that will either be fun, or fun in an ironic way.

Before the sleepover, her friends must each roll up a character and come with a prepared character sheet.

Signups are open! This is a pyp, so please choose a canon character/concept/monster/etc from Stranger Things to be on your "character sheet" (please choose 3, in order of preference). Send them to me and Sabrar via PM ASAP.

(We will be pretty lenient on what counts as a Stranger Things-related concept, but equally, no shade if you want to pick a main character / enemy / etc)

Rules: Standard mafia rules that I'm sure Bessie will have a copy of that she will no doubt post with her eager signup.

• Mods: Madge, Sabrar
• Size: TBD
• Speed: Day Phase lasts 5 days, with weekends counting as halftime. Night Phase 48 hours. Nights will end early if chatters are finished and all actions are received.
• Bastardry: Yes. Some roles may have hidden mechanics but the mods will not lie.


Posting rules:
1. No posting in the game thread unless you are playing in it.
2. No talking about this game except in the game thread or in an appropriately titled spoiler in the discussion thread
3. No player may read discussion spoilers about this game until they are informed by the mods that they are dead and free to read spoilers.
4. No editing your posts. For any reason. At any time.
5. Do not lurk! One post per real-life day is the recommended minimum. Consideration will be given for weekends.
6. Players lurking excessively will be replaced or, if replacement is not possible, modkilled. See above.
7. Any player who is modkilled for rule violations (not lurking) will automatically lose.
8. You may post in thread during the day phase but not the night phase. It is night once a mod posts a day-end post (this will not be before the official deadline, but knowing Madge could be quite a bit after it), or a hammer vote is cast, in which case it is automatically night, whether or not a mod has made a day-end post. Note that this means you may not post content after a hammer vote.
9. You may not play to lose, or act in a way that is clearly against your win condition.
10. You may not use encryption systems in order to communicate privately or circumvent these rules.
11. This is a game; it’s meant to be fun. Personal attacks or other offensive behaviour towards other players will not be tolerated.

Deadlines:
1. In general, days will last for 5 days. Nights will last for 2 days, or until all night actions are finished. Weekends will count as half time.
2. Adjustments will be made to accommodate holidays, or for other reasons if the mod deems it necessary.
3. In-thread deadline announcements from the mod override these rules.
4. Requests for extensions will be considered in exceptional circumstances only.
5. Deadlines are 'soft', meaning that posting and voting may continue after the deadline until the mod calls night.
6. Remember there is no talking after a hammer vote is cast.

Voting rules:
1. Votes and questions for the mod must be posted in bold and on a new line, like this:

You do NOT have to unvote to change votes, but it makes things easier and will be very much appreciated if you do. You can unvote in bold and on a new line, like this:

2. When someone gains a majority of the votes, they are automatically executed and it becomes night, as above. Posting content after the hammer vote is not allowed, even if the hammer vote was accidental.
3. If the deadline is reached and no player has been hammered, then the person with the most votes when the mod calls night will be executed.
4. If the votals are tied, then the person who hit the tied number of votes first will be executed, unless all players are voting solely for the tied players, in which case there will be no execution.
5. You can vote not to execute anyone by casting a vote for “No Execution”. “No Execution” will be treated exactly the same as any other player for determining votal results, except that "No Execution" always wins ties.

Death rules:
1. You’re alive until you are hammered, or a mod declares that you're dead, by PM or in thread.
2. Once you die, you may no longer post content in this thread. You may post death flavour or a ‘Bah! You killed me,’ post that reveals no information.

Private Message rules:
1. You must include the mods in any PM you send related to this game.
2. You can ask the mods questions by PM (at any time) if you'd rather not ask in thread.
3. No PMing other players concerning this game unless your role specifically allows it.
4. Any night actions must be sent by PM before the end of the night period. They can also be sent during the day prior if you would like. If sent as part of a factional chat, please indicate the action in bold on a new line, as with voting. If you don’t do this and we miss your action, tough.
5. You can send backup actions but don't make the conditions too complicated.
6. All chat is nightchat.
Top

Not going to sign up from the start, but will follow along and avoid spoilers. Not committing as a replacement, in case not enough time, but will keep my options open.
Top

We have nearly got the setup sorted. We could handle more signups so we're not closing them. Sorry for the delay guys, I'm busy and Sabrar's busy and because of our timezones we exchange one email per day lol
she/her
Plug: my vampire romance novel is finished!
Top